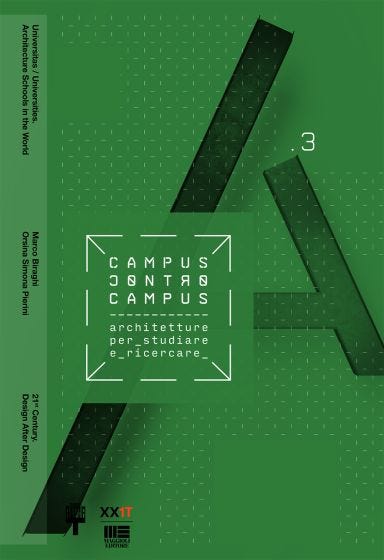 The theme of the university campus is central to the debate on the future of Milan. It represents a challenge for the new order of the city in its metropolitan dimension, an opportunity for architectural and urban regeneration that can give rise to new, updated, important systems of communal spaces.

Over the last two centuries, the building designed to house Schools of Architecture have often been driven by a specific ambition, beyond the customary aim of providing facilities adequate for their functions: the desire to teach a lesson of architecture through their own image and spatial organization. From the historic Bauakademie of Schinkel in Berlin to the recent Abedian School of Architecture by CRAB in Gold Coast, Australia, by way of the Crown Hall by Mies van der Rohe in Chicago and the FAUP by Álvaro Siza in Porto, to name just a few, what clearly emerges is the intention to instruct through the construction of a school.

A teaching that finds precise correspondences and concrete materializations in the spaces of higher education linked to the architectural disciplines: design ateliers, model making workshops, exhibition spaces. The correspondence between buildings and educational programs, a source of pride for Mies van der Rohe in the case of the IIT campus, may not make the architecture of schools actually “speak,” as Ledoux intended, but it certainly makes it eloquent