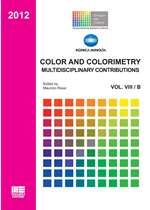 The Gruppo del Colore - Associazione Italiana Colore
www.gruppodelcolore.it - gruppodelcolore@gmail.com
It is well known that the subject of colour has an impact on a range of disciplines. Colour has been studied in depth for many centuries, and as well as contributing to theoretical and scientific knowledge, there have been significant developments in applied colour research, which has many implications for the wider socio-economic community. At the 7th Convention of Colorimetry in Parma, on the 1st October 2004, as an evolution of the previous SIOF Group of Colorimetry and Reflectoscopy founded in 1995, the "Gruppo del Colore" was established. The objective was to encourage multi and interdisciplinary collaboration and networking between people in Italy that addresses problems and issues on colour and illumination from a professional, cultural and scientific point of view. On the 16th of September 2011 in Rome, in occasion of the VII Color Conference, the members assembly decided to vote for the autonomy of the group. The autonomy of the Association has been achieved in early 2012.
Maurizio Rossi, March 2012
Many realities in science, culture and profession of Color, that since many years operate in Italy, merged over the time in our association, that lives in the "Conferenza del Colore" his main moment of annual aggregation. On the web site www.gruppodelcolore.it, edited by Osvaldo Da Pos, Claudio Oleari and Alessandro Rizzi, a story of these experiences is reported. In the Assembly of Palermo 2009, members decided to widen the range of multidisciplinary approaches. In Lecce's Conference in 2010 the presented papers where doubled: 60. In Rome's conference in 2011 there were 143 papers presented. For the edition of 2012 in Bologna we received 151 papers. Since 2009 the Gruppo del Colore effectively increased his size harboring experiences in the field of instruments and measuring, digital treatment, lighting, physiology and psychology, study of commodities, restoration, representation, in the field of urban areas, of design, history, culture and education. Since 2011 we are associate member of Association Internationale de la Couleur (AIC). In parallel to the success coming from the embrace of various different sectors and the increase of the number of multidisciplinary researches presented, in the last years, many members proposed to configure the group as an independent association. After a debate started many years before, in 2011 (at the Rome's conference) over the 90% of the members voted so that the Gruppo del Colore turn into an autonomous association keeping nevertheless his historical bond with the Società Italiana di Ottica e Fotonica (SIOF). Starting from this determination in 2012 we became Gruppo del Colore - Associazione Italiana del Colore. In the name is reiterated the 17 years old path as a base of our will to open us to the future as a new Associazione Italiana del Colore (Italian Color Association).
To SIOF goes our sincere thanks for having favored the birth and supported our group from 1995 to 2011.