Constitutional Preambles At a Crossroads between Politics and Law 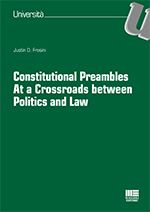 Constitutions are often preceded by preambles containing hortatory and sermonious language that most legal scholars believe are not truly operative. Using the methodology of H.C. Gutteridge and, in particular, his distinction between descriptive and applied comparative law, this book seeks to verify whether constitutional preambles really do lack legal value. This objective is attained by examining the extent to which constitutional preambles are used as a tool of interpretation, their capability of limiting amendments to the constitution and their use as parameters in judicial review.
More specifically, the first part of the study analyses the content and language of constitutional preambles across the globe, the second part compares two 'prototypes' - the United States and France - while the third part consists of a series of case studies on countries in Europe, the Americas, Africa and Asia.
What the results of this research indeed demonstrate is that in a significant number of legal systems constitutional preambles have far more validity and effect than is generally recognised.
Justin O. Frosini
Assistant Professor at the Bocconi University in Milan, Adjunct Professor at the Johns Hopkins University's School of Advanced International Studies in Bologna and Director of the Center for Constitutional Studies and Democratic Development.