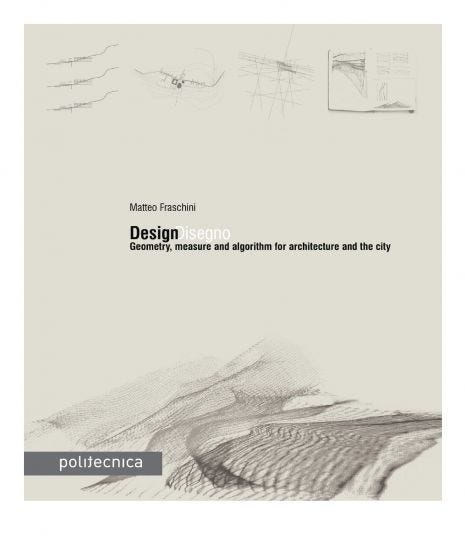 In a design process, the drawing (Italian: disegno) of an object or a space is the act of representing that thing with the idea of knowing and modifying it, and it is an essential moment. It is an operation that requires a synthesis capable of projecting and confronting on a two-dimensional surface - physical or virtual - the complexity of the world with an idea of form.

The concept of measure and measurement is therefore, for the designer, the instrument that makes it possible to make an object, architecture or an urban fact representable, abstract, knowable and therefore designable. Similarly, for the user of that space, the measurement will help to memorise, map and place him in relation to it. Mathematics and geometry have played a fundamental role in enabling this knowability. The machine of the two mirrors invented by Brunelleschi opened up the definition of the rules of perspective and performed the compression of a three-dimensional world regulated by numbers, on a two-dimensional surface. He defined a bijective (one-to-one) relationship between the drawn and the real world. This operation reinforced the distinct role of the tactile and the visual dimension - the stage and the scene - and permitted to describe and graphi- cally think of infinity and the infinitesimal. Towards the end of the last century, F. O. Gehry created his “machine”, a digital tool to “see and know” what he had manually modelled in his cardboard models Mathematics as the tool that structures forms and urban spaces, making them recognisable, for centuries has organized this “invisible framework” through discrete measures, proportions and modules. Now the complexity of urban spaces can be better understood using the concept of “modality of variation”.

This new framework suggests the study of algorithms capable of interpreting this dynamic modification process. These themes are addressed from a technical point of view, understood as the necessary knowledge to imagine and make an idea designable. This text is a reflection that, with the benefit of practical examples, proposes to reason on the relationship between an idea and its representation, between a sketch, analogical and digital models, and on the “mental” tools which manage this relationship.

It is furthermore a reflection on the theoretical and practical implications of the concept of fold, or better, on the act of folding, as a concrete and tangible capture of the infinitesimal that directs a tectonic possibility. To do this, to try and control the infinitesimal as a measure that gives structure to contemporary design, both at the architectural and the urban scale, a delving into mathematics as the algorithm that manages the machine, was necessary.

This publication is based on the doctoral dissertation in Urban and Architectural Design presented at the Politecnico of Milan and on the research and teaching activities developed by the author in that school and, subsequently, at the University of Cape Town.

Matteo Fraschini is a senior lecturer at the School of Architecture Planning and Geomatics of the University of Cape Town where he teaches in the Masters of Urban Design and of Architecture. His teaching and research activity is centred on architectural and urban design methods in relationship with the different scales of the contemporary city. He is an architect and holds a Ph.D in Architectural and Urban Design (2007). He has been a contract professor at Politecnico of Milan where he taught design and theory of architecture and where he organized several seminars and workshops with international Universities. Besides the research and teaching activity he has been working as an independent architect, developing designs at different scales, He has been awarded and mentioned in international design completions, and has founded, in collaboration with others, the web magazine Arc2città with the aim to stimulate the debate around the most relevant issues of contemporary design.

Geometry, measure and algortithm for architecture and the city