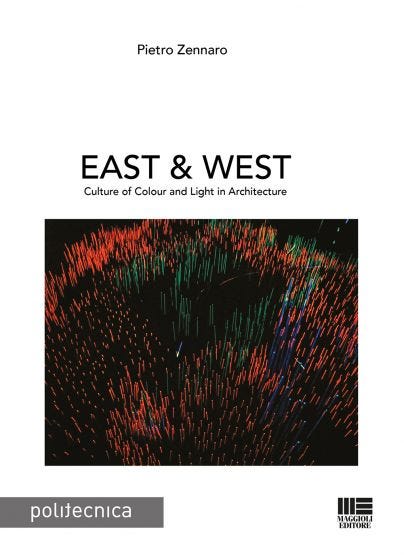 This book is written with the aim to fix some key points about the role of colour and light in architecture in the contemporary time, played by two so different historical cultures, strongly interconnected: the East and the West. In this time where the supremacy seems to be managed by the mercantile-economic power and not by the social, cultural and political organizations, all we imagine has an economic value. The use of colour and light isn’t over this logic. Every material or immaterial thing has a monetary value, so commonly the market appreciates only applied research. Every- thing else is absolutely secondary. In this way of attributing value in terms of economic production, colour and light have become strategic. A “particular” use of colour might affect buyers’ preferences. It’s commonly known that colour and light in architecture can discriminate some business.

Very far away from this contemporary approach, the book tries to iden- tify the mutual cultural aspects that distinguish or unify both the cultures. To make this analysis we need to find common aspects and verify the differences occurring in the co- lour and light field according to the researchers living in the two areas: East and West. The researchers involved in this work are for the West: Pietro Zennaro, Katia Gasparini and Alessandro Premier. Those engaged for the East are: Elisabetta Colla, Shu Yu’an, Zahra Javani and Mohammad Reza Moshkforoush.

Culture of Colour and Light in Architecture