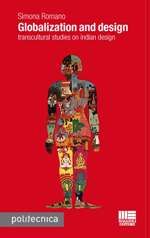 This book aims to reflect on the balance between tradition and innovation in the material culture of the global society. Because the general concept of "tradition" in itself proves to be too elusive (like the concept of identity) to come into play in the design process, it is understood not in its "monolithic" sense, but rather in its pluralistic meaning.
It is only by taking into consideration the many traditions of factors involved in the design process (identified by the Tomás Maldonado's definition of design given in 1961) that it is possible to reveal their effective contribution.
Beyond a pluralistic approach to the concept of tradition, the book, based on fieldwork, has taken into account also the interpretation of the term "tradition" through the current design literature and through case studies of the Indian context.
The interweaving between the "traditional Indian thoughts" and the "modern design theories" results in an original view, which can be assimilated to certain "postcolonial" literature that, through similar interweaving between traditional views and global fluxes, is able to bring really new content to the contemporary culture.
The conclusion draws attention of the design discipline to the body for what it represents in the global society: "the most local of the global sites".
The book opens the debate to different and wider issues which offer the opportunity to extend the debate on globalization for designers, operating across the world across the world, who still today mostly look at the "global" and "local" notions as a matter of style.
Simona Romano (Milano, 1971) is an architect specialized in Museology of Design and Transcultural Design Studies. She worked for Alessi Archive, Kartell Foundation and was the project leader of the Vico Magistretti Foundation's "office museum" in 2008.
She got a PhD from the Faculty of Design and Arts of the Iuav university in Venice (2009) with a thesis on Indian design. She is still working for the "New Design Vision" research group and teaches at the same university.
She has published texts and essays in various international architectural and design magazines. She is the curator of the New India Designscape exhibition at the Triennale Design Museum (2012).