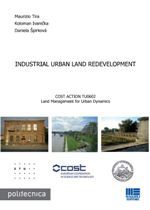 There is a growing concern toward urban sprawl that is accompanying the economic development of Europe as it is not sustainable in the long term perspective. Such development generated critical consumption of natural resources that claims for a radical change. One of the reasons why the urban sprawl happens is that the former urban industrial land stays underutilized and it is not redeveloped fast enough.
European Union TUD COST TU0602 Action "Land management for urban dynamics" offers the accurate framework to perform the Europe-wide comparative study, focused on land management regimes and policies for urban development and urban regeneration, including the problem of the redevelopment of brownfield areas.

COST- the acronym for European Cooperation in Science and Technology- is the oldest and widest European intergovernmental network for cooperation in research. Established by the Ministerial Conference in November 1971, COST is presently used by the scientific communities of 36 European countries to cooperate in common research projects supported by national funds.