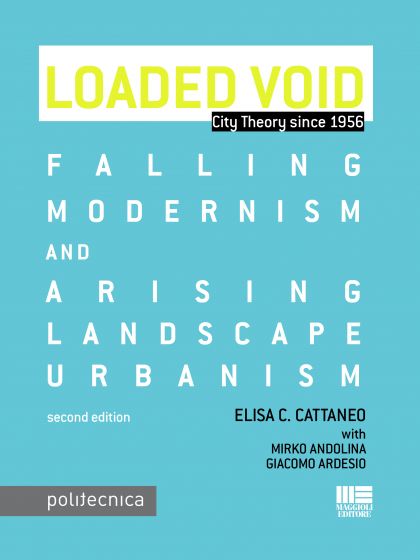 1956.  Falling Modernism and Arising Landscape Urbanism.
The selected essays are related to the hermeneutical circle established between Europe and the U.S. after World War II. Radically changing the “geography” of architecture, this circle critically acts in the crisis of the Modern Movement.
The year 1956 in particular sees the concurrence of specific conditions (Waldheim, 2009), which open up a Pandora's box in the research on the city: the “Urban Design Conference” at Harvard University; the CIAM of Dubrovnik; the exhibition This is Tomorrow; the Alba Congress; and Hilberseimer’s projects in Detroit.
These analytical lines mark a first step in the deformation process of the dominant systems activated in architecture from the beginning of the century.
Landscape Urbanism is the latest step. Very promising, it reverses the circle’s direction, introducing North American research into European knowledge.
The book considers Theory as the new Practice.
To take power away from reality in order to introduce a new modality in knowledge, prior to a new shape: this is the first aim of the texts collected in this theoretical anthology. In order to create infinite platforms of research about the city.

Elisa Cristiana Cattaneo Graham Foundation Grant Recipient in 2014, She is Adjunct Professor in Landscape Design at the Politecnico di Milano. She researches experimental ecological urbanism and its theoretical implications.
In 2004, after a degree cum laude in Architecture and Urban Planning, she attended the European Master in Strategic Planning for the Architectural, Urban and Environmental Resources. In 2009, she completed a PhD with Merit in Architectural and Urban Design, defending the thesis Void Density: a Relational Approach for Urban Design. In 2010, she was Visiting Scholar at the Massachusetts Institute of Technology, developing the research project: Space, Place, Context, Landscape: the Hermeneutical Circle US-Europe since 1956. In 2011-2012, she was Visiting Scholar at the Graduate School of Design, Harvard University, developing the research project: WeakCity: Notes on Landscape Urbanism (List Publisher, 2015).
She is founder and director of an independent research agency Weakcircus, active in studies, research, and project development in contemporary urbanism within the Theory of Weakness.
She is co-founder and co-director of B.L.U.E. (Building Ecological and Landscape Urbanism), platform of research on landscape as new strategy for contemporary cities. Since 2002, she has been the principal of her firm, active in public projects and international competitions.

Mirko Andolina
Mirko Andolina is an architect working on the relationship between ecology and contemporary cities, in particular in emerging and crisis territories. He holds a Master of Architecture degree from Politecnico di Milano, with the thesis Hologramatic Territory-Ecological Strategies in West Bank Territories, partnership with Harvard University’s Graduate School of Design. He is currently an architect at Topotek1, Berlin. developed in Since 2012, he has been a part of the independent research agency WeakCircus.

Giacomo Ardesio
Giacomo Ardesio is a graduate of the Politecnico di Milano in Architecture with the thesis A Swarming City, Patterns of Interference, a body of research on the urban dynamics acting within the informal settlements in Mumbai developed with URBZ. Since 2014, he has been a part of Fosbury Architecture, a collective of architectural research and design based in Milan and Rotterdam.