Morphological, technological and functional characteristics of infrastructures as a vital sector for the competitiveness of a country system 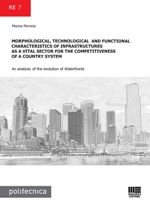 A close association between cities and water is inherent since the history of civilization whereby most cities are located on or near a water body of some type. Throughout the history of civilisation and contrary to contemporary conditions, there has always been a close and integrated water-city relationship. Water played also a major and to a certain extend a determinant part in the development of urban form and pattern and the type of water resourcebe it a river, sea, lake or canal, shaped the development of the settlement. In this context, by being an interface between city and water, waterfronts are one of the most complex and challenging urban lands in cities and it is very critical, prior to embarking on a revitalisation project, to understand the changing structure of urban waterfronts and their integration with the existing city structure. The urban waterfront development is widely regarded as a frontier on contemporary urban development. Sydney, London, Amsterdam, Hong Kong, Tokyo, Toronto, Osaka, Kobe and Dublin are examples of cities developed through the waterfront development process. Waterfront revitalization has been the most remarkable urban development attempt in the world during the last two decades. It is not therefore a coincidence when waterfront rehabilitation as lately been defined as a "genuine urban revolution".Marzia Morena is a researcher with the BEST Department (Building Environment Sciences and Technology) at the Politecnico di Milano, with which she has collaborated since 1996. She does teaching, research and consulting work, specializing in the area of technological innovation and in the relationship between the construction process, real estate development and facility management. In 2010 she was appointed Chair of the Italian chapter of the Royal Institution of Chartered Surveyors (RICS). Since 2006 she has been founding associated of the AREL board (Associazione Real Estate Ladies).She has authored and co-authored several publications on the topics of real estate and construction management.

An analysis of the evolution of Waterfronts