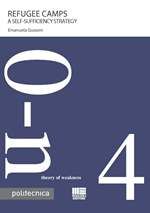 As heterotopias, twenty camps are scattered throughout Palestine hosting thousands of refugees since the beginning of the fifties. The Palestinian refugee camp, conceived as a temporary solution - to the needs of a huge flow of immigrants in poor conditions, has solidified over time but it is still perceived as a short term arrangement.

Refugee camps in Palestine do not belong to the
hosting country; they cannot be considered urban nor as villages - in the countryside. Formally they are under the tutelage of UNRWA (United Nations Relief and Works Agency) but due to historical evolution and actual living conditions, nowadays camps suffer of structural weaknesses: extremely high density, widespread risk of building collapse, poor water and energy supply and inefficient sewage system.

The project presented in this book aims to consider camps a “independent machines” scattered throughout the territory and its ultimate objective is to develop a viable self-sufficiency strategy for camps using tools of a very lightweight design, the exploitation of natural resources and community activities.

Emanuela Gussoni
Teaching assistant at Politecnico di Milano, she graduated in April 2014 with a thesis entitled “Refugee Camps. A self-sufficiency strategy for Arroub RC” . She spent her research data collection period living in the Dheisheh Refugee Camp (PS), hosted by the Laylac Association and travelling around Palestine. Her research mainly focuses on unstable territories and on the impact anthropology has on architecture during confticts.
She also spent periods of time doing research in France, China, Kosovo and Turkey.