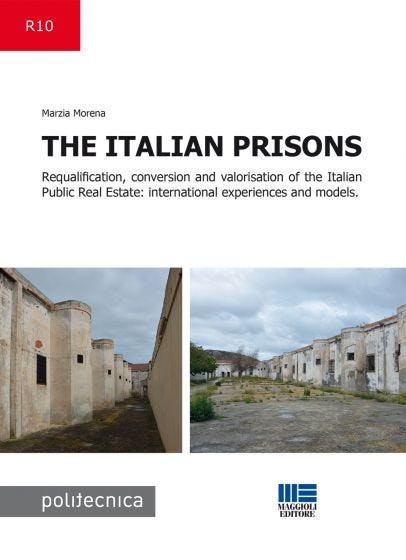 What could be the commercial and landed value of prison buildings that are located inside towns and which are of a great historical value? The issue is that the Italian Government is unaware of the answer. Even if the Italian Government knew the answer, they would not be able to properly manage such a vast amount of buildings, because they lack the competence to do so, which has been widely demonstrated thus far.
Some of these prisons are still located in the old centre of some towns, in environmental havens, or tourist resorts and could be converted into other destinations of use. The State Property Agency has already taken steps in this direction, by planning the functional ren- ovation of prison-like buildings such as barracks and public buildings, which are currently occupied by administrative or ministerial offices. The current occupants would be moved to newly developed areas far from the old town centres and would be well connected by efficient transportation infrastructures. Therefore, why not start this economic circle for penitentiary buildings as well? Firstly, private enterprises and entrepreneurs’ associations should be involved, through a fully transparent and adequately remunerated process, in drafting an intervention program that will gradually collect information on the public prop- erty stock. This would simplify the process whereby the censed buildings will be reconvert- ed to the most suitable functions.
There is only one obstacle between this theory and practice: the scarce liquidity of the State, particularly in the most recent years. How can the State therefore raise the neces- sary funds to put this idea into practice? The only solution lies within the active involvement of private companies. However one question comes to mind: how can private enterprises be involved in the financing of public works as represented by prisons?

Marzia Morena is a lecturer with the ABC Department (Architecture, Built environment and Construc- tion engineering) at the Politecnico di Milano, with which she has collaborated since 1996. She currently teaches at Master of Science in Architecture Science - School of Architecture and Society and Master of Science in Management of Built Environment - VI School of Engineering Politecnico di Milano. Scientific interests are geared to the study of the transformations in the building cycle, with special focus on the management of the built environment and on the relationships that exist among the various players of this process, from the design stage to facility management and on Territorial Marketing. Founder member in 2008 of the “Permanent Observatory on the Local Public Administra- tions” (OPPAL) and member of its Scientific Board. Master Post Graduate Coordinator of Politecnico di Milano and SDA-Bocconi on Real Estate Management area. Co Director of Executive Course of MIP, the Business School of Politecnico di Milano. She has authored and co-authored several publications on the topics of Real Estate, Construction Management and Territorial Marketing. Since 2014 she has been the President of Federimmobiliare. Since 2010 she has been the President of the Italian chapter of Royal Institution of Chartered Sur- veyors (RICS). Founder member in 2006 of AREL (Associazione Real Estate Ladies) and member of board until 2013