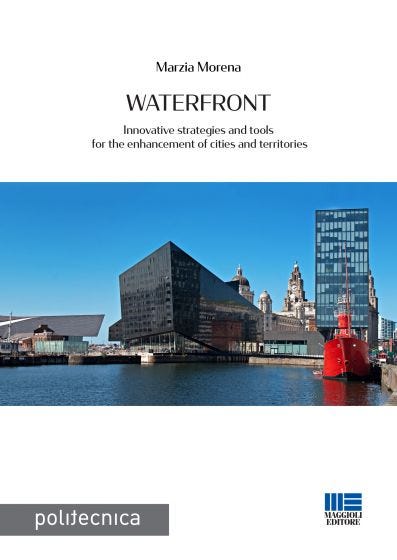 A remarkable aspect of waterfronts is the change over time of users, and functional and formal features. Scalar dimension, local strategies, process management tools, financing methods and interactions among the various players involved in the transformation of the permeable boundary and the liquid cities: these are some issues of the complex relationship between territories and water. This relationship epitomizes all the contradictions and the problems of contemporary strategies and actions enhancing the built environment.

Waterfront has become a topic: it stimulates diverse interests and involves big cities, as well as the small and medium-sized towns, in redevelopment and functional recovery operations exploiting the huge opportunities offered by the water resources. The analysis of past and present experiences shows that the interaction between the city and the water is a continuous and complex process requiring remarkable effort and a multidisciplinary approach, enabling the cooperation among Public Administrations and Local Governments and the involvement of different players.

Nowadays, more than ever, cities are experiencing financial difficulties, with limited funds for public works and many bureaucratic limitations in the allocation of public money.

Therefore, different ways must be identified by which Public Administrations could collect additional resources to finance a sustainable cities development and the enhancement of built environment.

The today revolution lies in the interconnection of new technologies and global networks.

Innovative tools as Civic Crowdfunding and Green Bond could serve as tools to solve this critical situation and support the public authorities in implementing public projects.

Civic Crowdfunding and Green Bond are in their development phase. They are spreading fast and are more often adopted by the local Administrations, thanks to the social and economic benefits.

These innovative financial tools are not extensively adopted for the development and enhancement of cities. Their promising future is mainly due to the transparency of the decision-making process in implementing projects of public interest, giving citizens the opportunity to participate in the development t of the territories.

Marzia Morena
Is associate professor of MSc at Management of Built Environment and MSc at Architecture - Built Environment - Interiors at Politecnico di Milano. Founding partner of Real Estate Center (REC) of Dep. ABC of the Politecnico di Milano. In 2008 she was among the founding partners of the “Permanent Observatory on the Local Public Administrations” (OPPAL) and is coordinator and member of its Scientific Board. Director of Executive Course of MIP, the Business School of Politecnico di Milano. Since 2018 founding partner of WaterFront Lab of Real Estate Center of the Politecnico di Milano. Since 2017 member of the Executive Board of Assoimmobiliare. Since 2016 member of The Continental Europe Educational Standards Board (CESB) of The Royal Institution of Chartered Surveyors (RICS). Chair of Federimmobiliare from 2014 to 2016. Chair of the Italian chapter of The Royal Institution of Chartered Surveyors (RICS) from 2010 to 2016 and member since 2006. Founder member in 2006 of AREL (Associazione Real Estate Ladies) and member of board until 2013.

Innovative strategies and tools for the enhancement of cities and territories