A critique of graphic methods of urban analysis 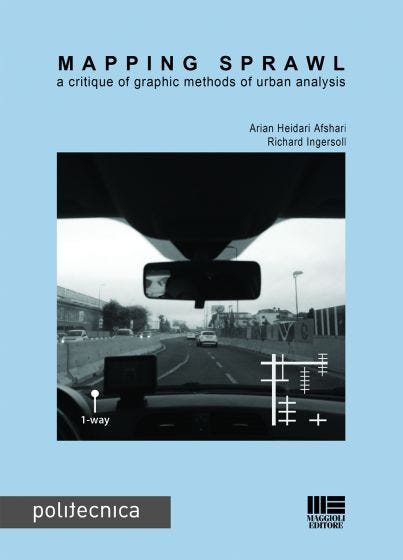 Mapping Sprawl
a critique of graphic methods of urban analysis
If a new urban revolution is underway, with more than half the planet living in cities, the truth is that most of the inhabitants do not really live in cities – they live in sprawl. How can we describe this more heterogeneous and scattered landscape? In this book the authors give a critical assessment of several graphic methods, including those of Kevin Lynch, Robert Venturi/Denis Scott Brown, Albert Pope, Paola Viganò, and Stefano Boeri, to explore how one can go beyond the classic method of figure/ground representation to describe sites that often have more ground than figure. Contemporary Milan, specifically its eastern edge, is the test site, and four case study projects have been prepared to illustrate how these methods can be used in a critical manner. The book also includes a comment on the effects of globalization on the urban development of contemporary Milan, and in a final chapter hints at a possible unpreparedness for the environmental problems of the future, proposing that the better we know how to map sprawl, the better we will be prepared to deal with changes.

Arian Heidari Afshari, born in Kerman, Iran, is an architect working in Milan since 2009. He recently completed a doctorate with the title “Spawlifictation. a new method to analyze periurban space” at DAStU, Politecnico di Mila¬no. He is a former teaching fellow at CEPT University in Ahmedabad, India and currently teaches as adjunct professor at AUIC, Politecnico di Milano.

Richard Ingersoll, born in California, US, has taught courses on urbanism and ecology in the US, Europe, and China. He was founding editor of Design Book Review (1997-1983), writes regularly for Arquitectura Viva (Madrid), and published the second edition of the textbook, World Architecture. A Cross-Cultural  History in 2018. His earlier book, Sprawltown. Looking for the City on Its Edges (2006), is a theoretical prelude to this book.