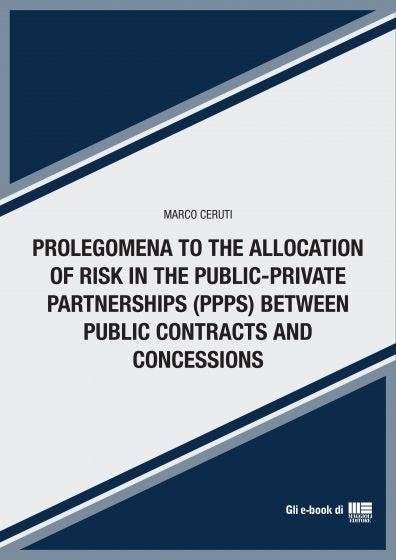 The evolution of public procurement at EU and, by reflex, national levels, has brought about the emersion of different models: public contracts, concessions and Public-Private Partnerships (PPPs).

This paper deals with the examination of risk allocation among the various genera of public procurement contracts and their species to understand what happens when the risk comes into play and which remedies are provided for by the law and the doctrine.

The aim pursued is to demonstrate that there are different types of risk and that the expression “operating risk” appears to be extremely limited in comparison to the reality that in theory it would and should represent.

By applying the theory of organization, we can clarify the differences and the common traits between public contracts and concessions into the broader concept of Public-Private Partnerships (PPPs).

In Italy we use the term “appalti” for the “public contracts” under EU law and we call “concessioni” the “concessions” (contract as well), so that it makes easier to fix the distinction between the two, at least in the language (despite the several flaws occurring in the translation from English: hereinafter this should be taken into due account).

Marco Ceruti
Is a Lawyer in Italy and a Ph.D. in History and Doctrine of the Institutions at the University of Insubria, Department of Law, Economics and Humanities, Como Campus. He also cooperates with the Observatory on Public Procurement Law at the University of Trento as a member of the editorial board.