The master in India 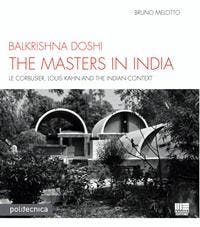 Immediately after the Indian Independence (1947), Le Corbusier was invited to take part in the process of providing a new identity to the Country: his legacy is a group of architectures and a whole town which echoed all over the world. About one decade later, Louis I. Kahn came to India to build one of his most extraordinary masterpieces.In the previous book of the same series, Sangath: Indian architecture between tradition and modernity (2012), Balkrishna Doshi offered the readers some keys to interpret the richness and variety of Indian architecture. the essays collected in this new volume focus on the historical period, during which the two masters worked in India. The essays elaborate on the circumstances in which the two masters worked, their different approaches and the role which their architecture played, and are playing, in the local context.Doshi's writings are important for at least two reasons: primarily because Doshi, having personally witnessed their work, offers a wealth of details that contribute to a deeper understanding of the architectures the Masters have built in Ahmedabad and Chandigarh. secondly, because the point of view is that of an internationally renowned designer, who is deeply immersed in the local culture.The book includes an essay by Bruno Melotto, which presents the local architectural scene in India through some of its most important personalities, and concluding with a recent and unpublished interview with Balkrishna Doshi which provides an insight into the principles inspiring his architecture.

Balkrishna DoshiEstablished his own office in Ahmedabad in 1955, after having worked for years with Le Corbusier, both in Paris and in India. Apart from his international fame as an architect, Balkrishna Doshi is equally known as an educator and institution builder. He has been Founder Director of School of Architecture (1962-72) and School of Planning (1972-79) at CEPT, Ahmedabad, and the founder of the internationally known insitute Vastu-Shilpa Foundation for Studies and Research in Environmental Design. He is a Fellow of the Royal Institute of British Architects and of the Indian Institute of Architects. As an academician, he has been visiting the U.S.A. and Europe since 1958, helding important chairs. He has also been jury member in several international competitions. In recognition of his distinguished contribution as a professional and as an academician, he has received several awards and honors.

Bruno MelottoGraduated in 2002 and in 2008 earned the title of Doctor of Philosophy at the Polytechnic University of Milan. In 2011 he published Ars domestica. Riflessioni sugli spazi del quotidiano, in which housing is studied in relation to contemporary art. Housing in contemporary cities is studied in the book, published in 2012 and co-written with Orsina Simona Pierini, Housing Primer. He is also the editor of another book on Balkrishna Doshi: Sangath. Indian Architecture between Tradition and Modernity, published in 2012. Lecturer at the Polytechnic University of Milan since 2008, in 2013 he moved to India, where he is currently involved in teaching and research at CEPT, Ahmedabad. His work as an architect includes projects, proposals, participations and prizes in competitions.