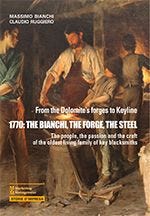 Massimo Bianchi, born in 1958, represents the seventh generation of the "Bianchi family of locksmiths" of Cibiana in the Dolomites. He studied at the Bocconi Business School, the ISTUD, and the London Business School, and has always worked in the world of keys, following in his father's footsteps. He has been a businessman and manager, becoming Executive V.P. of a multinational company listed on the stock market. Triathlon athlete, marathon runner, cyclo-cross racer, a lover of classics and managerial studies, he has contributed to the development of the community of the territory from a social point of view, also as the President of the Gruppo Metalmeccanico - Unindustria Treviso from 1993 to 1996. In 2002 he breathed new life into the key dynasty with Keyline and founded the Bianchi 1770 Group. Married to Mariacristina Gribaudi and father of six children, he represents the continuity and memory of the "Bianchi family of Keys" which endowed the nation with the most important district in the world for keys and key-cutting machines.

Many people think that some children were born with silver spoons in their mouths, but when they leave home I can't even go into their rooms. Of the six of them, five are always traveling around the world. Some of them stay away for months at a time, and when it's time to say good-bye I don't even have the courage to look them in the eyes. They are the ones to tell me not to say anything. Then I hug them and watch them go. MARIACRISTINA GRIBAUDI

This is the destiny of pioneers: they start things early, so that by the time the market has understood them, they will be too old to savor the satisfaction MASSIMO BIANCHI

This Series is intended to publish the most original and interesting stories of business. In this way we hope to compile and reconstruct the history of those who did and continue doing business, seeking to explore truths that are more or less familiar, forgotten episodes, paradoxical and unique situations that mark the personal affairs of those involved. The Keys of the Bianchi family tells the story of the oldest family of businessmen in the world that, since 1770, have been producing keys and machines for their duplication. Matteo, the forefather, was a locksmith in Cibiana di Cadore during the era of the Republic of Venice, Serenissima, while his descendents continued in the trade through the eras of Napoleon, the Restoration, the Risorgimento, and the Kingdom of Italy. This business continues to thrive even today, having survived the Industrial Revolution, two world wars, and the Italian economic miracle. Such social and political upheaval was bound to impact the world in terms of social conventions and values, including marital and family relations, the invention and introduction of electric lighting into homes, the railway, the telephone and the cinema. Through all of this, the Bianchi family, from generation to generation, not only witnessed and were subjected to the changes triggered by such events, but were also the protagonists of such revolutionary developments. The result is a story that exalts the family's ties to the territory and the contribution made to the evolution of keys, an item of everyday use that Camillo, a pioneer in the concept of duplication, exported worldwide and transformed into a technological device and an object of design. Brimming with sentiment are the pages about the love story with the "pretty Austrian girl" and on Camillo's dignified life journey in the face of adversity. those on Mariacristina's concern for the children and those of overwhelming emotion, and of long-repressed dreams and aspirations, that however Massimo eventually reveals.

From the Dolomite's forges to Keyline
The people, the passion and the craft of the oldest living family of key blacksmiths