Between History and Memory, the Blue Jodhpur 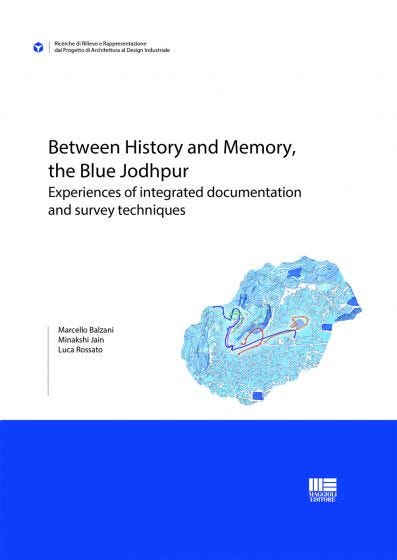 This book describes the outputs of a cooperation path between the Department of Architecture of the University of Ferrara and CEPT University of Ahmedabad, India.
When we started this experience, in 2013, we firstly identified the crucial features of a possible educational approach in dynamic and changing contexts such as those of Global South Countries. In order to address this topic, this book presents the results of the educational project developed in the Blue City of Jodhpur (India) as an academic cooperation involving professors, researchers and young students from the two countries, local authorities and professionals.
The book aims at examining the role that heritage documentation and representation can play in emerging countries such as India if they are implemented as joint activities involving different stakeholders.
Jodhpur, the so-called “Blue City”, is an outstanding example of the extremely relevant role of mixed research and documentation methods applied in a context where tangible and intangible heritage are closely linked and in a great risk of loss, due to population pressure, growing tourism and other threats.
The book presents several on-field approaches concerning visions about cultural heritage documentation in terms of research, future directions, methodologies and working tools in the field of education for heritage preservation and enhancement.
As the reader will understand the workshops experience have been organized over a period of five years, consisting in research and on-field surveys carried out by the group of students supervised by professors coming from the two institutions.
During the last year the workshop was open to students with a background of design coming from the University of Ferrara as well as to students of urban management of CEPT University. In these workshops, different urban areas of the historical city center have been analyzed and surveyed, setting up a methodology able to meet the main needs of knowledge, understanding, refurbishment and conservation. In this direction, integrated survey processes were tested and applied in order to provide tools for an overall “reading” of the uniqueness of the local heritage and to point out possible conservation strategies.

Marcello Balzani  Architetect, Full Professor (ICAR / 17) at the Department of Architecture, University of Ferrara in Italy. Since January 2006 he is the Director of the DIAPReM centre (Development of Integrated Automatic Procedures for Restoration of Monuments). He was scientific responsible for several national and international research projects and his activities took place in various important world archaeological sites, in monumental contexts and in relation to several small centres in many regions of the Italian peninsula. He has developed restoration and urban regeneration projects in several Italian historical centres. He is a member of the Italian Union for Drawing, of the National Institute for Urban Planning, of ICOMOS and of the Focus Area Cultural Heritage, Horizontal Issue Archaeology. Since March 2010 he is scientific director of TekneHub and Scientific Coordinator for the Construction Platform of Emilia-Romagna High Technology Network.

Minakshi Jain Architect, visiting Professor at the department of architecture, CEPT University, (Center of Planning and Technology) , in Ahmadabad, India. She worked on an exhibition under Charles and Ray Eames in 1964 and studied under architect Louis Kahn in 1966. Her project of conservation of Nagaur fort won the UNESCO Asia–Pacific award of excellence in 2002 and was shortlisted in 2013 for AGA KHAN award and she received Silver Medal from Domus Award for Restoration and Preservation in 2012. She has several conservation projects to her credit, such as Amber fort and palaces, Jantar Mantar, Hawa Mahal in Jaipur and Dalhan pur fort, Gagurn fort, Mauborda fort and Garh palace in Jhalawar. She has authored a few books with Prof. Kulbhushan Jain, “MUD architecture”, “Architecture of Indian Desert”, “Arid cities”, “ Thematic spaces” and “Architecture of the Royal Camp”. She has jointly conducted workshops on old city centers of Jodhpur and “Hands on” workshops at Nagaur.

Luca Rossato Architetect, Research Fellow (ICAR / 17) at the Departmen of Architecture, University of Ferrara, in Italy. Since 2008 he started to cooperate with the University of Ferrara Architecture Department as Grant Researcher and later as Research Fellow. His areas of investigation are both the vernacular and modern architecture documentation, representation, and enhancement. In these fileds he was coordinator project for DIAPReM centre activities in India and Brazil. Contract professor at the University of Ferrara, he was visiting professor at Pontificia Universidade Catolica do Paranà (Curitiba, Brazil), CEPT University (Ahmedabad, India), Mackenzie University (São Paulo, Brazil) and at Burgundy School of Business (Dijon, France). He’s deeply involved in publication fields and he’s been member of editorial staff for “Paesaggio Urbano” and author and co-author of many publications. He is a member of the Italian Union for Drawing.