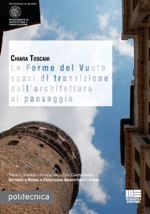 This research deals with what have been defined as forms of the void1 concerning the urban and the landscape scale, which offer the possibility of observing and experimenting the mechanisms of connection between the architectural "objects". This approach comes from the need of considering architecture not only as an object in itself, but also in its effort of addressing the existing fabric as well as the wider territory. This means considering the relation between void and full, between figure and ground as one of the main objectives of the urban and architectural composition. Therefore this research tries to reflect upon the figures of the open space as a form of the void being built through the figure or ground relation (I am going to demonstrate how such relation in certain cases is not so univocal), with the architectural volumes, taking into account at first some paradigmatic examples at the urban and the landscape scale, belonging to the historical town and to the Modern. This in order to offer, afterwards, a contribution as to the possible figures of the open contemporary space, thus excluding, of course, the cases in which it is generated as a residual form of the architectural object. The forms of the contemporary void include both spatial forms resuming the theme of the urban enclosure, although it is evolving through different devices, and forms trying to achieve a dialectical compromise between the bounded void of the historical town and the continuous one of the Modern, reaching, in a few cases, a new dimension of the spatial structure that I have called "figural". Chiara Toscani è Dottore di Ricerca in Progettazione Architettonica e Urbana, Assegnista di ricerca presso il Dipartimento di Architettura e Pianificazione, Politecnico di Milano. Professore a contratto del Laboratorio di Progettazione Architettonica 3 presso la Scuola di Architettura e società del Politecnico di Milano. Tra le sue pubblicazioni: L'invariante architettonico e urbano del poché, Maggioli, Milano, 2011 Gio Ponti: un albergo in Val Martello, Alinea, Firenze, 2011.