The Sound of Grass Growing 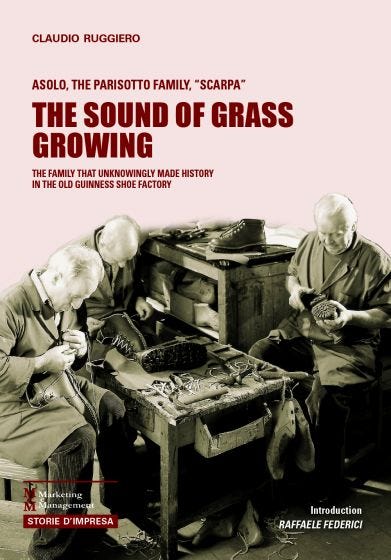 We continue in their opus, the offspring of their relentless courage and lack of presumption. It all derives from the example they set [...] and the result is that, eight decades later, we are still producing mountaineering boots, preserving the history of Francesco, Luigi, and Antonio while writing our own pages – those of Sandro, Piero, Cristina, Davide, and Andrea – and of the whole Parisotto family [...]

[...] A book is forever: it is lasting and remains for posterity as our legacy. Some say that it will disappear because sounds and images make a stronger impression than words on a page. Yet I personally believe that the most beautiful thing about a book is that its letters form words, and that the words on a thin sheet of paper then create images in
our minds, and in our memories.

Eager to break away from the world that for centuries dominated Asolo and Maser (Treviso), Francesco and Luigi started up a mountain boot workshop in the parish stall and set out on foot and by bicycle to sell their products in the valleys of the Dolomite Mountains. They were soon joined by their younger brother Antonio, and the three “sons of farmers”, barely over twenty years old, evolved into “craftsmen” in an Italy where a decade before it would have been almost scandalous to do so. However, they never would have dreamt that they were to become the “paròni”, the owners, of Scarpa, the shoe factory owned by the ale magnate Rupert Guinness, where they had worked as youngsters. Yet, they succeeded in preventing it from closing in 1956, proving their mettle as “true entrepreneurs” and pioneers of Made in Italy. They were no doubt successful businessmen, but always of the “hands-on” variety. Indeed, even after their shoes and boots had gained international renown and were worn by experts when climbing the highest mountain peaks or setting out for the South Pole (First Italian Expedition in Antarctica, 1985), after Sunday morning Mass the three brothers could inevitably be found at Scarpa, sweeping the factory floors and courtyards. Indeed, the distinction between public and private, and between work and relaxation, did not exist for the Parisotto family. Above all because the company represented sustenance, emancipation, and the space where lifeblood flowed; secondly, because the dominant forces in their world were nature, beauty, and precision, all three of which were brought to life through the masterful use of their hands, instruments, and tools. They also understood, however, that the inexorable passing of time demanded changes which only their children could implement; those children who entered Scarpa to consolidate the family reputation and launch the “IT, plastic, and production revolution”. After moving the factory to Via Fermi in Asolo, Davide, Sandro, Piero, Cristina and Andrea reinforced the brand name and started up sites and branches in America, Europe, and China; they were pioneers in the use of Goretex and Pebax and launched on the market the first low hiking shoe and the first ski boot with a shell in plastic for downhill skiing in telemark style. Having left behind “Victorian” manufacturing methods, the members of the second generation fell into step as leaders in the development of the sportsystem just as the first generation had envisioned. The transition from one generation to the next essentially took place without contrasts or conflicts, in a peaceful silence comparable to the sound of grass growing.

On the cover, left to right: Antonio, Francesco and Luigi could be found working diligently at their shoemaker’s benches, day in and day out.

Claudio Ruggiero, 58, holds a degree in History from the University of Milan. Soon after completing his education, he discovered his passion for the Development and Psychology of Organisations and decided to specialise in this field. A student of Franco Della Peruta and of Emilio Sarzi Amadè (the journalist and writer from whom he learnt the art and trade), he is now a researcher and narrator of historic and family businesses, producing volumes like L’Oro d’Italia (Veneto, Lombardy, Piedmont, Liguria). For Maggioli he wrote the series Storie d’impresa.